The OSI model is designed to ensure compatibility of network devices (and their operating systems) regardless of manufacturer. OSI stands for Open Systems Interconnection and is defined by the International Standard Organisation (ISO).

The model has seven layers:

Which can be remembered by either of two mnemonics:

or from the bottom up:

Please Do Not Throw Sausage Pizza Away 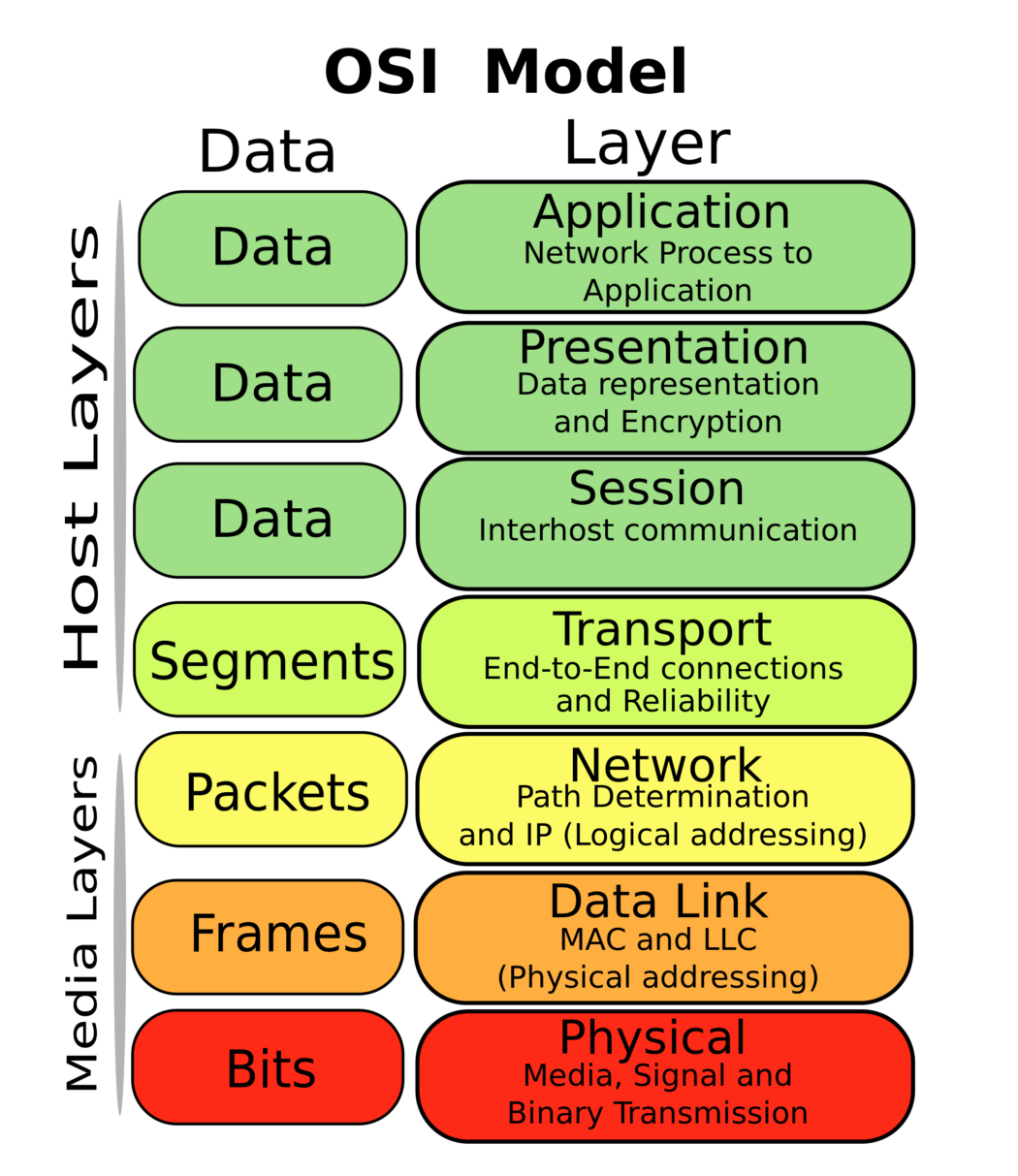 The first 4 layers of the model really work at the operating system/software level, within the host:

I found the application layer a tad confusing, it doesn’t concern application programs as such but enables software to access network resources by providing the interface to the layers down the stack. It concerns itself with ensuring that other hosts in the network have the resources necessary to make a connection. It coordinates partnering applications and ensures that data integrity and error recovery procedures are in place. The application layer is only activated when it is apparent that access to the network will be needed soon.

The presentation layer presents the data to the application layer. It is responsible for encoding and decoding data ready for transmission. The standard defines how data should be formatted. Data compression, decompression, encryption, and decryption are all tasks fulfilled within this layer.

The session layer is responsible for making sure that requests to the network from applications are only sent to and from that application. It ensures that data isn’t shared with other requesting applications on the host. It does this by creating, managing and removing a session for each application request to the network. It also coordinates communication between systems and defines which mode (discussed in data communication fundamentals the transmission will be: simplex, half-duplex, or full-duplex.

The transport layer is responsible for inserting data into a data stream and pushing it out from the host onto the network. This is where the Transmission Control Protocol (TCP) and the lesser-known UDP (User Datagram Protocol) do their thing. They are the rules for how to send the data from one host to another.

The key difference is that TCP provides reliable, ordered, and error-checked delivery of a stream of bytes between applications running on hosts, whereas UDP is much more laissez-faire about data stream reliability. UDP is a connectionless protocol, it doesn’t care if the connection is broken, it values latency over reliability.

The next three layers are known as the media layers and are concerned with actually moving the data between hosts, starting with the:

The network layer concerns itself with figuring out where devices on a network are so that it can figure out the path the data needs to take through the network to get from the sender to the receiver. The network layer manages logical device addressing (IP addresses) primarily through the use of routers.

Two types of packets are used at the Network layer:

Route-Update Packets are used to update neighbouring routers about the networks connected to all routers within the internetwork. Protocols that send route-update packets are called routing protocols, and some common ones are Routing Information Protocol (RIP), RIPv2, Enhanced Interior Gateway Routing Protocol (EIGRP), and Open Shortest Path First (OSPF). Route-update packets are used to help build and maintain routing tables on each router.

The route update packets are important as it helps ensure that data packets end up at the right network. I’m going to make up an analogy of how sending a letter would work if the postal service worked like routers.

Network Addresses. These are protocol-specific network addresses. A router must maintain a routing table for individual routing protocols because each routing protocol keeps track of a network that includes different addressing schemes, like IP and IPv6.

Interface. This is the exit interface a packet will take when destined for a specific network. I.e. whether the packet needs to enter the network behind the router or be forwarded onto another router.

Key attributes of a router are:

The Data Link layer provides the physical transmission of the data and handles error notification, network topology, and flow control. This means the Data Link layer ensures that messages are delivered to the proper device on a LAN using hardware (MAC) addresses and translates messages from the Network layer into bits for the Physical layer to transmit.

To take our letter from Birmingham to Plymouth analogy further. The router knows enough that the letter needs to go somewhere in Plymouth. Devices in the data link layer know the exact address in Plymouth to deliver the letter to.

The Data Link layer formats the message into pieces called a data frame and adds a customized header containing the destination and source hardware (MAC) address. This added information forms a sort of capsule that surrounds the original message to ensure once it has passed through the internetwork to get to a rough location, the devices in the data link layer have enough information to ensure it arrives at the exact destination.

Each time a packet is sent between routers, it’s framed with control information at the Data Link layer. However, that information is stripped off at the receiving router, and only the original packet is left completely intact. This framing of the packet continues for each hop until the packet is finally delivered to the correct receiving host. The packet itself is never altered along the route; it’s only encapsulated with the type of control information required for it to be properly passed on to its destination.

The data link layer has specifications defined by the Institute of Electrical and Electronics Engineers (IEEE). It has two sub-layers:

Media Access Control (MAC) Defines how packets are placed on the media. Contention media access is “first come, first served” access, where everyone shares the same bandwidth — hence the name. Physical addressing is defined here, as are logical topologies. What’s a logical topology? It’s the signal path through a physical topology.

Line discipline, error notification (not correction), ordered delivery of frames, and optional flow control can also be used at this sublayer.

Logical Link Control (LLC) is responsible for identifying Network layer protocols and then encapsulating them, an LLC header tells the Data Link layer what to do with a packet once a frame is received. It works like this: A host receives a frame and looks in the LLC header to find out where the packet is destined — say, the IP protocol at the Network layer. The LLC can also provide flow control and sequencing of control bits.

The last one hooray! The Physical layer does two important things: it sends bits and receives bits and it communicates directly with the various types of actual communication media. Different kinds of media represent these bit values in different ways. Some use audio tones (bring back 56k modems yeah!), and others employ state transitions—changes in voltage from high to low and low to high. Specific protocols are needed for each type of media to describe the proper bit patterns to be used, how data is encoded into media signals, and the various qualities of the physical media’s attachment interface such as electrical, mechanical, procedural, and functional requirements for activating, maintaining, and deactivating a physical link between end systems.

That’s all cool but what does this all actually mean in practice? Well, the OSI layers mean that the different functions fulfilled within each layer are encapsulated from one another. Basically, each layer doesn’t need to know how something is done, just that it is done.

When a host transmits data across a network to another device, it’s wrapped with protocol information at each layer of the OSI model. This information is called the header. Each layer communicates only with its corresponding layer on the receiving device.

At a transmitting device, the data-encapsulation method works like this:

And there we have it, a very large summary of how data gets from one computer to another.