This route starts at Stoke Village Car Park, which is free to park. It then climbs to what was once the highest point in Plymouth, before descending to sea level and back again. I have mapped the route on Strava so you can download it to a GPS, or print out the map.

I have also run the route so you can see a fly through below:

Before the city expanded toward Roborough this was the highest point in Plymouth and the 360˚ view from the Redoubt is one of the best in the city.

‘Mount Pleasant Redoubt’ was first built in 1780 to protect the dockyard. According to a plaque at the entrance to the park it was modified in 1811 and had become obsolete by 1860.

A larger information board in the redoubt shows what it would have looked like and provides more information. 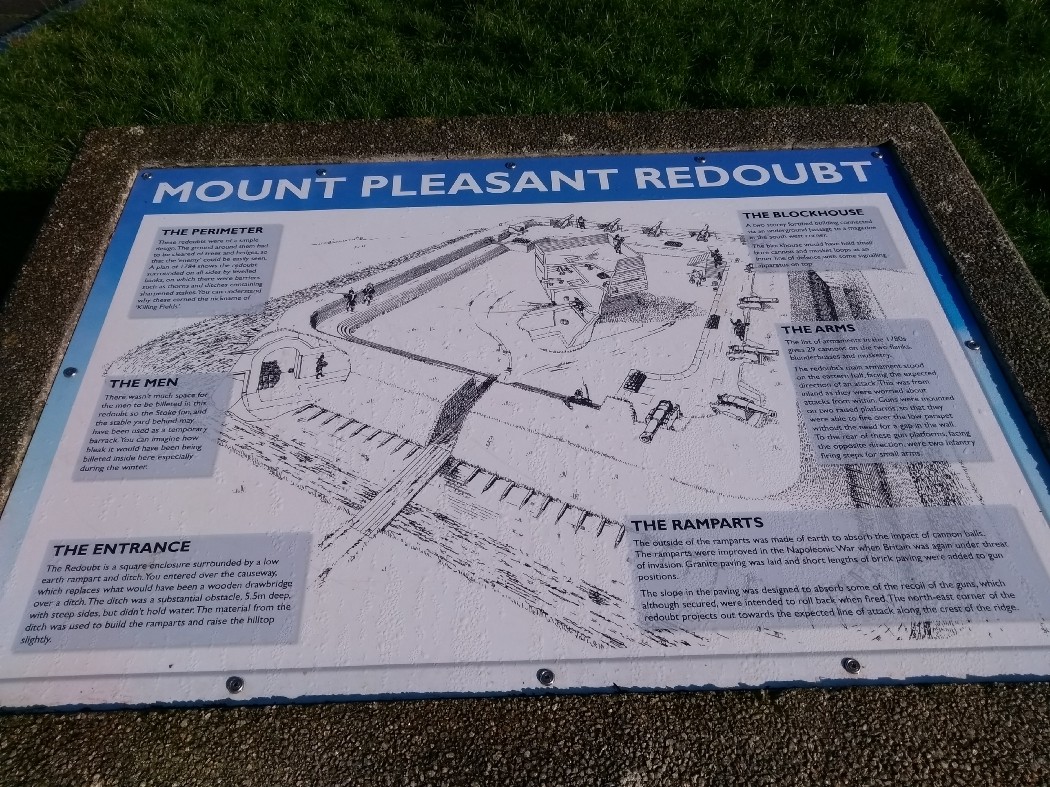 As you leave Blockhouse park and come down Home Park, you are greeted with the imposing sight of Clarendon House. 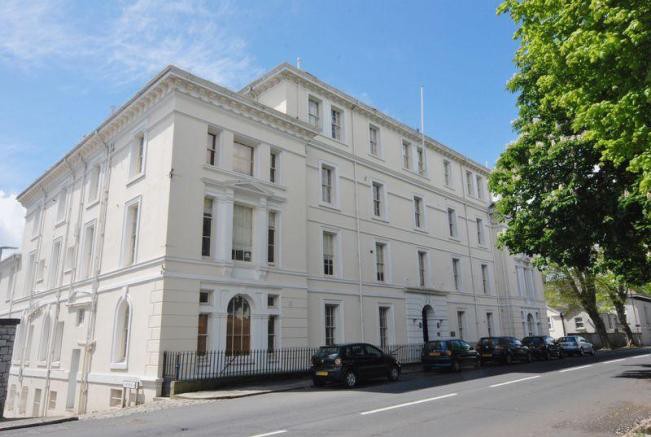 On the right hand side of the main entrance is a plaque which states.

During the years 1940 to 1947 this building was the training centre for the Polish Navy and Headquarters of the Polish Navy Southern Command following the outbreak of World War II. This Plaque was unveiled on 20th May 2001, by the Lord Mayor of Plymouth, Councillor David Viney and Mr Stanislaw Szwabski chairman of Gydnia city council, to commemorate the 25th Anniversary of the twinning of Plymouth and Gydnia.

The building itself appears older than from the 1940’s. The excellent National Libraries of Scotland Historic maps website allows you to view old Ordnance Survey maps overlaid on modern maps. According to the 1854 to 1863 OS map, it appears that Clarendon house was previously an orphanage, the ‘Royal British Female Orphan Asylum.’ 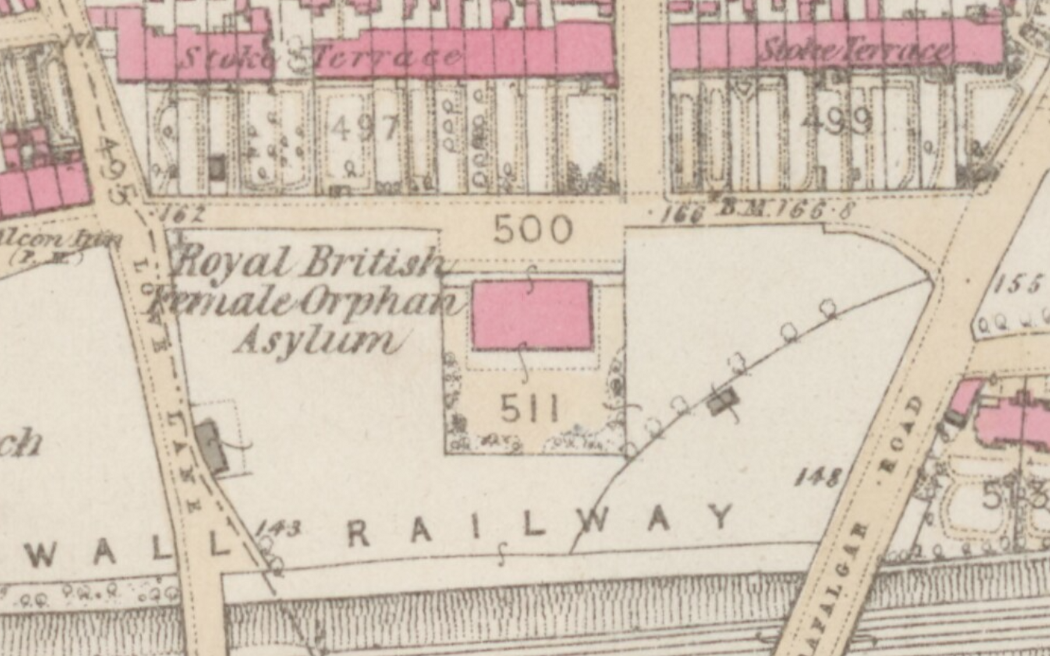 This led me to www.childrenshomes.org.uk who have a detailed and fascinating page about the history of the Royal British Female Orphan Asylum. Clarendon House’s foundation stone was laid on April 23rd 1845 and according to the website it sounded quite the event:

The ceremony was witnessed by the Lord Lieutenant of Cornwall, the Mayors and Corporations of Plymouth and Devonport, the Magistrates of the County and Borough, the Commissioners of the town, the heads of Departments Naval and Military Officers, and many others who walked in procession to the site. It was said that the rich combination of masonic, civic naval and military uniforms, the military music, and the presence of well-dressed and beautiful females, attracted a crowd of 30,000 spectators.

After passing Clarendon house the route takes you through the attractive cottages and town houses of Acre Place to Devonport Park, in my opinion the most beautiful park in Plymouth. Following the spherical central path offers sweeping views of the river Tamar and the dockyards below. 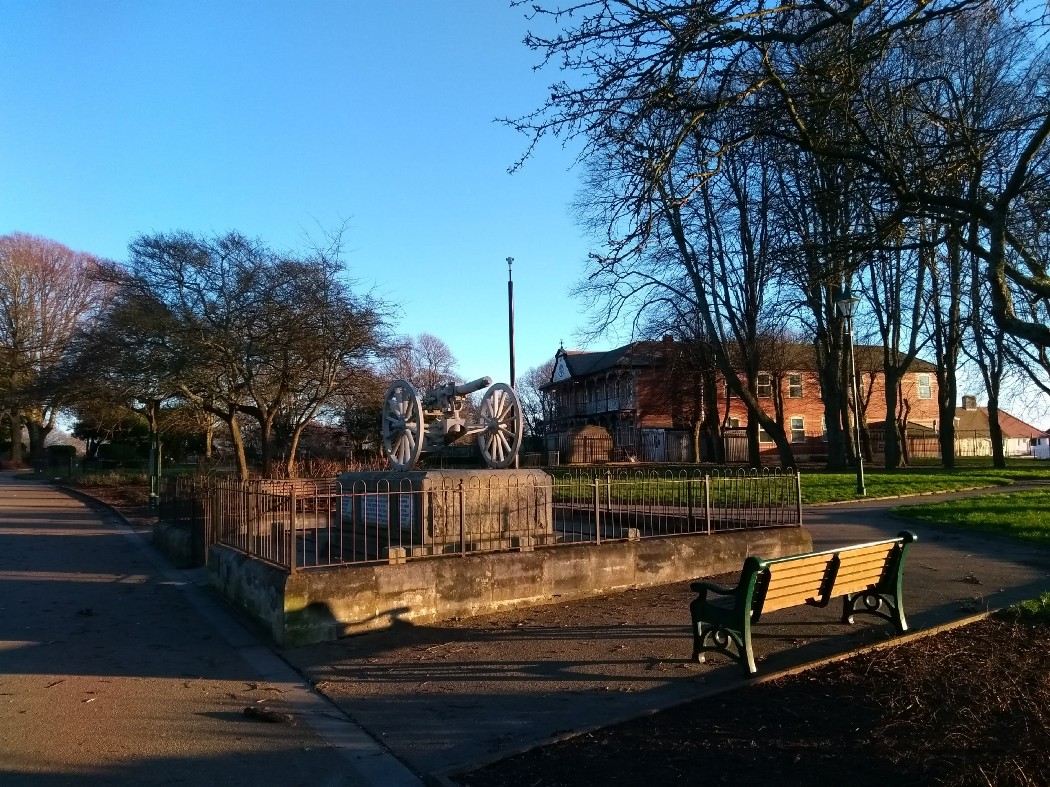 Eventually you come to the H.M.S. Doris Memorial. For a long time I mistakenly assumed the gun was one of the field guns used in the Boer war and commemorated in the annual Naval gun carry. The gun is actually a captured machine gun. The crew of H.M.S. Doris did have to drag a ships gun hundred of miles inland on an improvised carriage but it was much bigger than a field gun. The image below shows the 4.7 inch gun being fired at the Battle of Magersfontein.

Just down from Devonport park on a rather long straight, and fairly bleak road is the Raglan Barracks gatehouse. The barracks are no more having been demolished in the 1970’s but the grade II listed gatehouse remains, albeit in a rather sorry state. 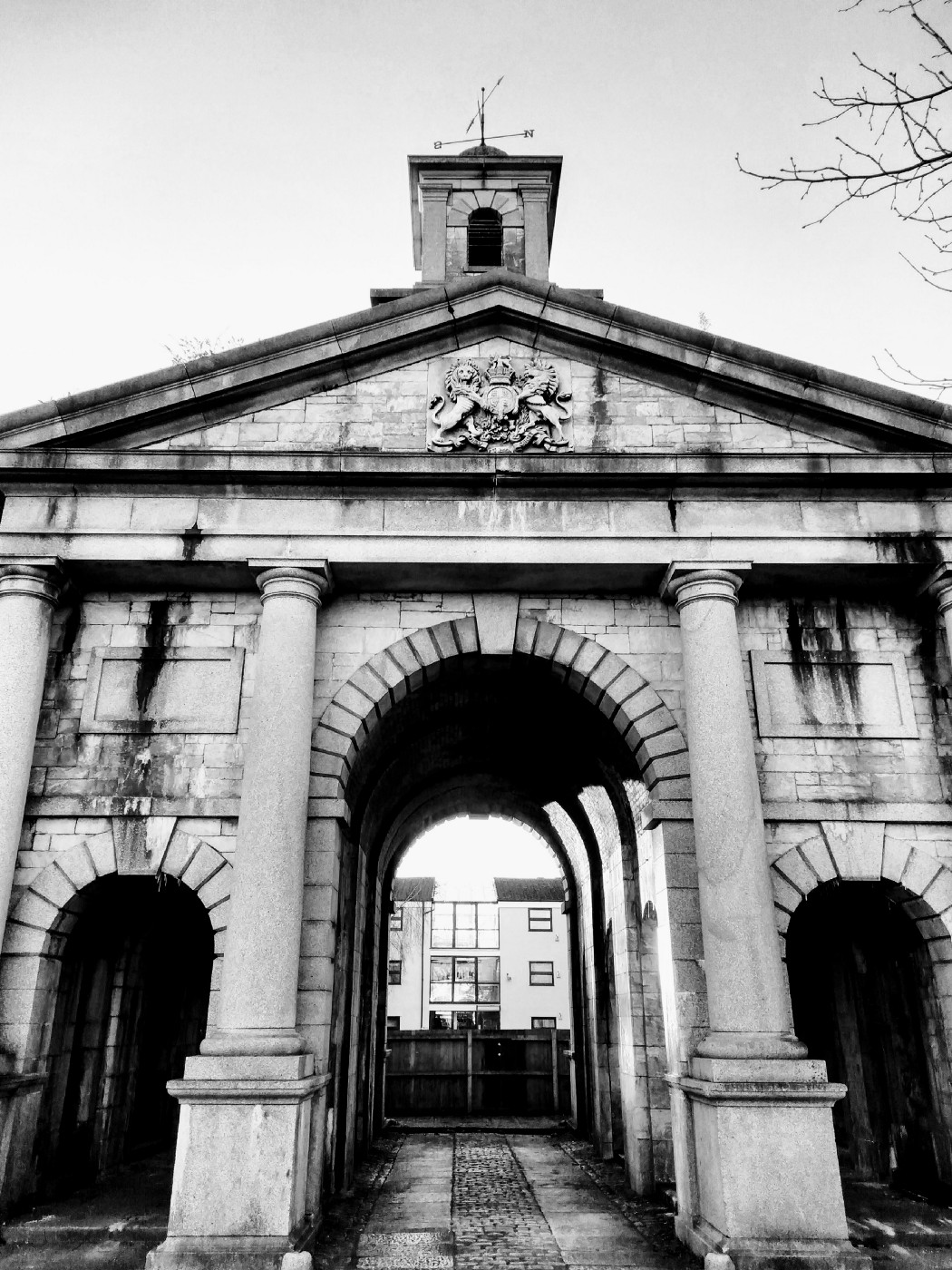 The barracks were built between 1853 and 1858 during the Crimean Wars. The gate was designed by Captain Francis Fowke who also designed the Royal Albert Hall and parts of the Victoria and Albert Museum. The Devonport online website provides a comprehensive history of the barracks.

I find it hard to imagine the sheer size of the barracks parade ground. It doesn’t feel possible that such a large space existed just behind this building now that it is surrounded by flats. 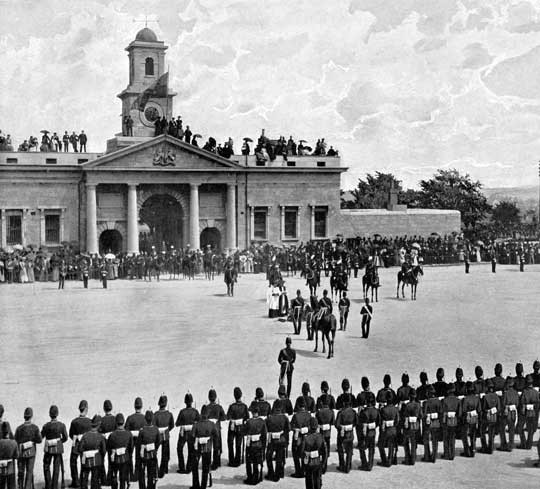 Devonport Guildhall is a legacy to the fact that the ‘City of Plymouth’ is a relatively recent creation. The three towns of Plymouth, Devonport and Stonehouse were merged in 1914 to become the city of Plymouth.

Correction. Wendy Andrews on Facebook has informed me that the three towns united in 1914 but didn’t become a city until 1928

Before then the guildhall had been the administrative centre of Devonport, the largest and most prosperous of the towns. 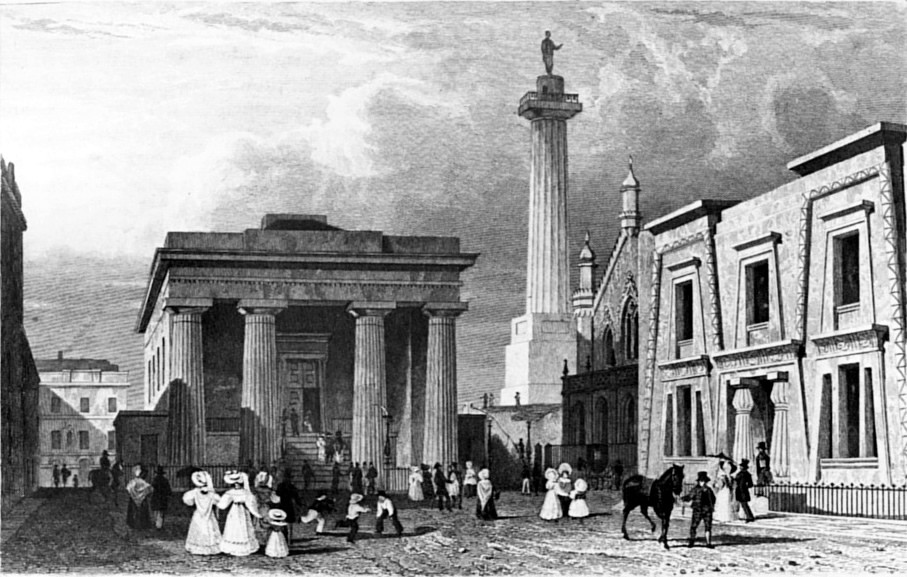 The Guildhall, Column and Egyptian House were designed by the architect John Foulston who features heavily in Plymouth historical architecture. Originally there was also a chapel but during the extensive bombing of World War II it was destroyed. Indeed most of the surrounding area was destroyed. 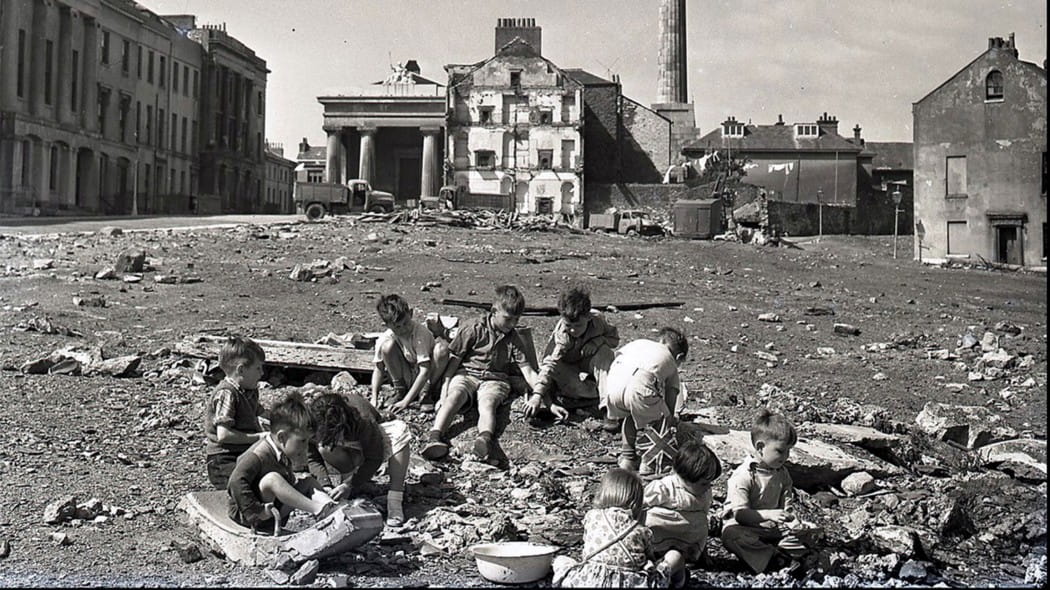 A combination of the move of administrative power from the area, and the destruction of World War II led to the Guildhall falling into disuse. The column was also closed to the public in the 1950’s. The Egyptian house (one of only two buildings of this style in the country) started as a school, then a library and, would eventually become a social club which it still is today.

The surrounding area, Ker street, has been through two regenerations since the war. The first was a post-war high density set of flats which dwarfed the historic buildings. The poorly planned blocks led to social problems arising and the area of Devonport became a less desirable place to live. 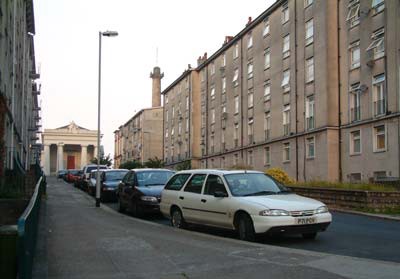 In 2007 work was started in regenerating Ker Street aiming to reduce the density of the street and try to address the social issues of the area. Happily the Guildhall and Column was given a restoration grant and have been painstakingly restored by the Real Ideas Organisation. The column is now a visitor attraction and the view is worth the climb up the 137 granite steps. The Guildhall is used for weddings, craft fairs and other events, it is also home to the excellent Column House bakery. The future is less certain for the Egyptian House having recently been sold by the owners of the social club after 30 years.

Correction. Mandie Leaves, the owner of the social club has informed me that it is still up and running and anyone is welcome to pop in. I for one will visit for a look inside. 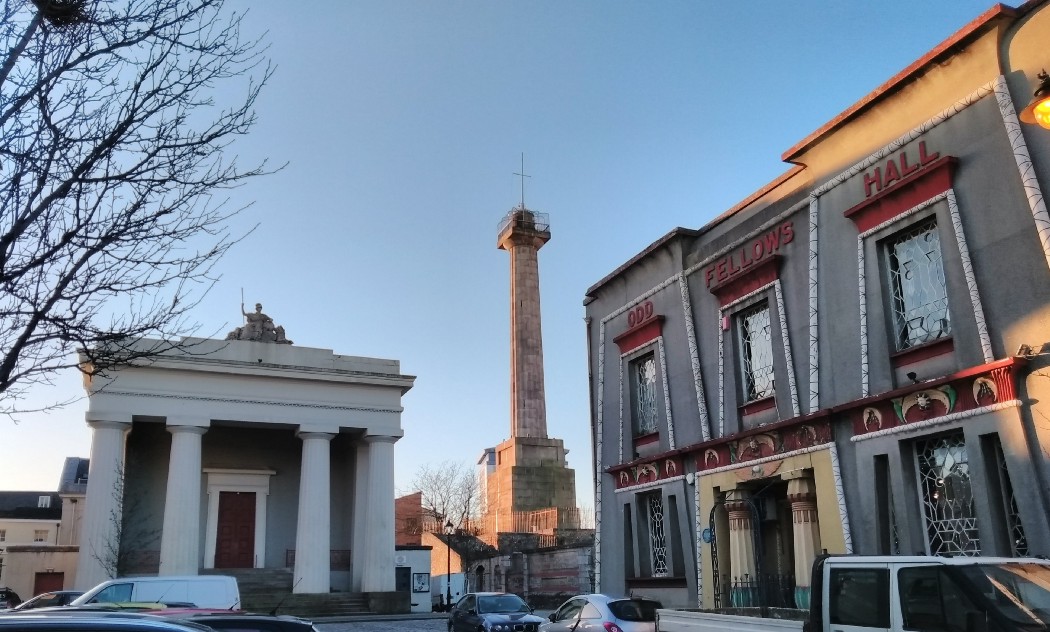 A short distance from the Guildhall is Mutton Cove, a charming harbour with views across the Tamar to Cornwall. I’m struggling to find any information about the history of the cove, so please comment if you have any leads.

Just to the west is Slipway Number 1 and the ‘King Billy’ figurehead. Slipway No 1 is the oldest covered slip in any Royal Navy dockyard. Built in around 1763, the roof wasn’t added until 1814.

In front of the slip is the ‘King Billy’ figurehead, originally it was the figurehead on the 120 gun ship H.M.S. King William. When the ship was redesigned for steam power in 1859 the figurehead was replaced with a smaller one and the original was displayed in front of the slip. In the 1990’s the original figurehead was found to have significant rot and a fibreglass replica was made and now stands in its place. The original figurehead is now at home in the Devonport Naval Heritage centre, and is being restored before being moved to ‘the Box’, Plymouth’s new museum, when it opens in 2020.

Along from Mutton Cove is Richmond Walk and the Mount Wise swimming pools. Richmond Walk was built in the 1790’s and 1800’s to provide local people with access to the shore as the Naval command at Mount Wise continued to expand. The swimming pools were built in 1924 and refurbished in 2000. They continue to be used today and are extremely popular in the summer months.

Just along from Mount Wise Pools is Blagdon’s boatyard. In 1831 this was the the site of Victoria Cottages. Charles Darwin lodged here before embarking on H.M.S. Beagle to the Galapagos Islands.

Richmond Walk ends at the excellent Jolly Jacks restaurant, from there it is a short distance to Stonehouse Bridge. The bridge was designed by John Smeaton, (of Smeaton’s lighthouse fame) and opened in 1773 to join Devonport with the neighbouring town of Stonehouse. Stonehouse creek, which the bridge crosses, was filled in as far as Millbridge in 1972 to form the recreational grounds. 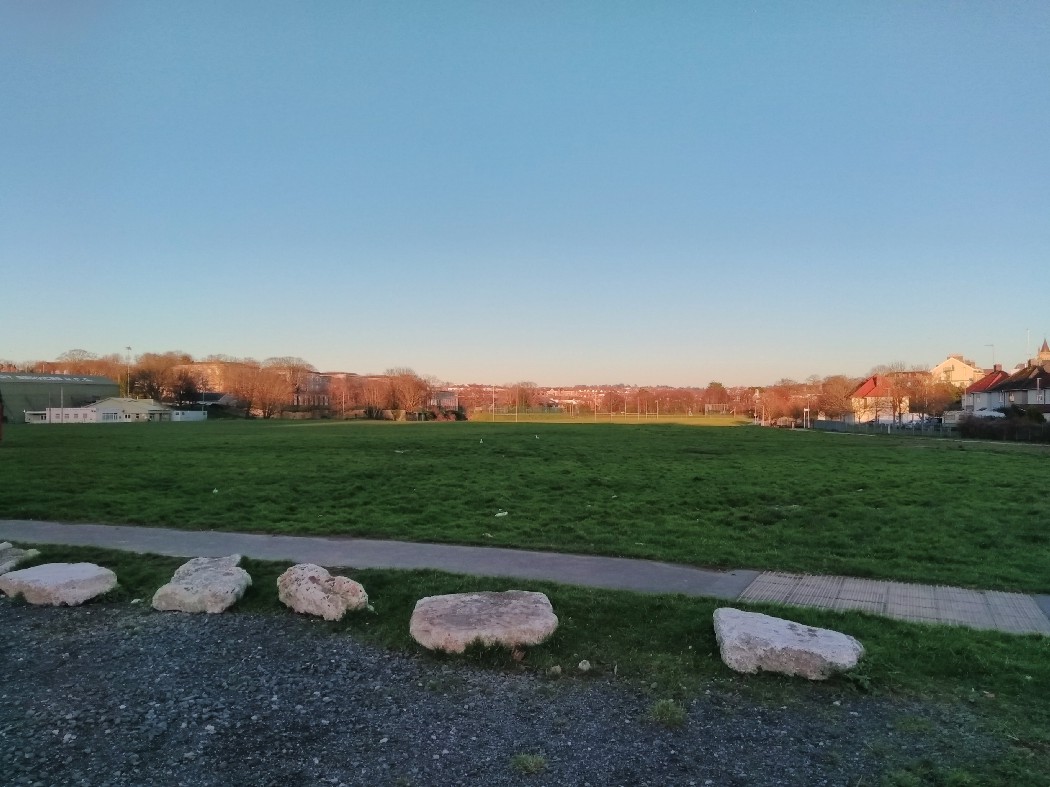 On the north side of the old creek is Devonport High School for boys. This imposing building was originally the Stoke Military Hospital and was built in 1797 for the British Army by Napoleonic prisoners of war. The design was based on the Naval hospital to the south of the creek, now the Millfields private estate. The Naval hospital was state of the art for its time and will be the subject of future articles.

The Stoke Military Hospital closed in 1945 after 148 years of use, initially the buildings then became two schools, Tamar High School and Devonport High School for Boys. Tamar High was closed and absorbed into DHSB in 1989. 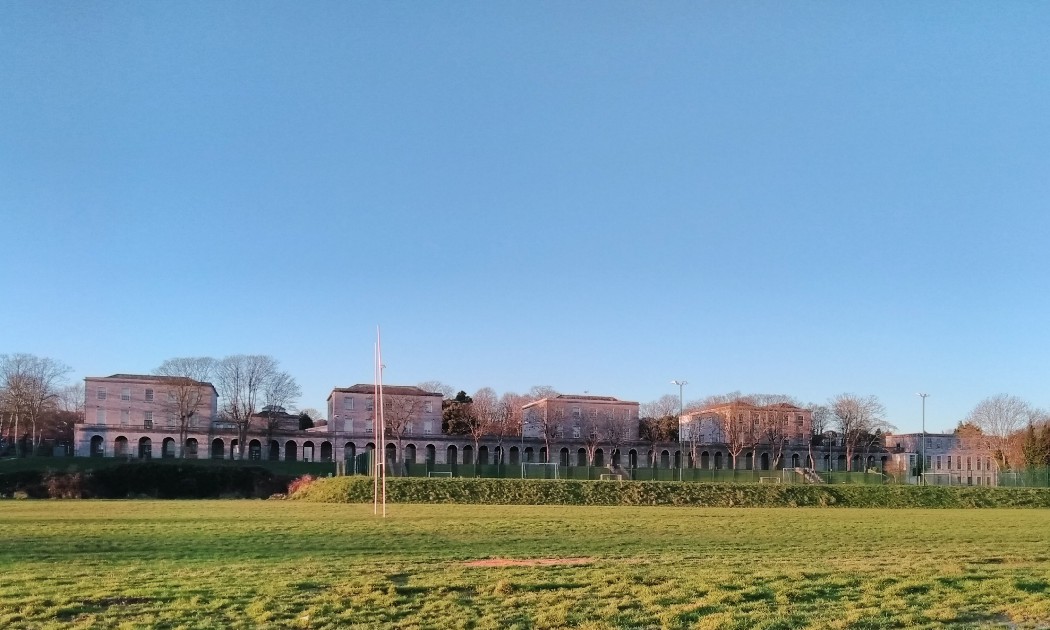 Before the building of Stonehouse Bridge, Mill Bridge was the route across Stonehouse Creek to Stonehouse and Plymouth. Nowadays its not even obvious it was a bridge at all but originally both Stonehouse Creek and Victoria Park to the North East were open bodies of water (Victoria Park was known as the rather foreboding Deadlake). In 1813 the artist Turner sketched the view North towards Stoke Damerel showing the mill and bridge in the foreground. 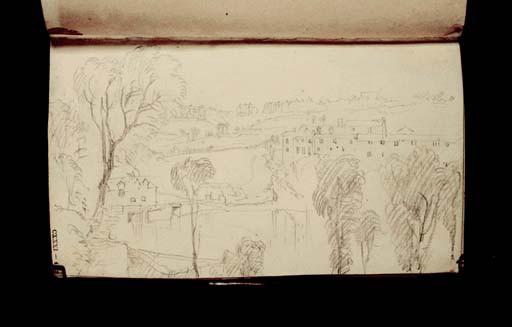 The first bridge was built in 1525 and was more of a dam to use the tidal power of the Deadlake to drive the mill. At its height the mill had three wheels driving 5 pairs of millstones however operation ended in the 19th century.

From Millbridge head North up Molesworth Road past Georgian and Victorian mansions to return to Stoke Village.